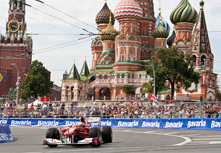 Moscow July 17, the fourth time of the famous Moscow City Race in Moscow was a huge success with no fewer than 300.000 racing fans lined the streets of Moscow to cheer on the drivers.

On the opening gala the embassy of Singapore hosted the Singapore race night where Voerman Moscow arranged the logistic part. It’s a great evening including a fashion show and many great expositions of race cars.
Logistic partner Voerman Moscow looks back on a very successful event.

Dennis van Diemen, Country Manager at Voerman Russia says “We look back on a fantastic organized event which certainly had a Dutch flavor in Moscow”.

The next day was the highlight when we enjoyed demonstration races of Ferrari, Mercedes and Team lotus.