Sailing with the Ambassador of the Russian Federation - Voerman International

Sailing with the Ambassador of the Russian Federation 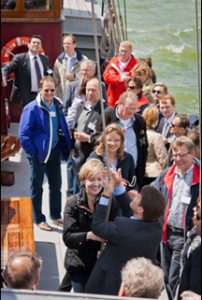 On June 24, 2011, the Dutch-Russian Centre for Trade Promotion (NRCH), sponsored by Voerman, hosted the NRCH Networking event on the IJsselmeer, called “Sailing with the Ambassador of the Russian Federation”.

This year the NRCH sailed the impressive topsail schooner “The Willem Barentz”.

After the opening speech of Bernard Zonneveld, chairman of the NRCH, H.E. Roman A. Kolodkin gave a short but powerful speech. During the stop in Volendam there was plenty of time to enjoy a variety of the local fish specialties. Back on board, the sails were hoisted for the return trip, with a powerful wind in the back, to Batavia port in Lelystad.

After hoisting the sails, all present had the opportunity to enjoy a delicious barbecue below decks. On the main deck one could enjoy the sun during the network activities.

Our advice: Don’t miss the boat next year!