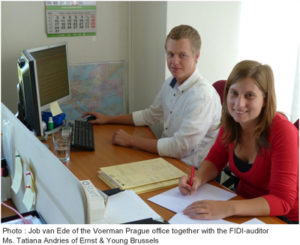 On September 29, 2011, Voerman Prague was delighted to invite Ms. Tatiana Andries of Ernst & Young Belgium to perform an Audit in order to get FIDI FAIM Accreditated. This was a much exited moment as this was the first visit for an audit for the Prague Office.

Therefore Quality Manager René Postma of the Voerman International HQ came two days prior to the audit to guide them through this process.

During these two days, final training took place and practical information was given to ensure the staff was fully prepared for the audit. The audit is for a full day and consists of a visit to the office and warehouse, document and certification check, file check and a competence test.

The audit went very well and the auditor was very surprised about the way Voerman Prague was handling the files. She had previous experiences other FIDI movers in Prague where the audit took much longer. Job van Ede explained her that the reason is the usage of a new operational system called RedSky, which was introduced in the beginning of 2011. RedSky gives Voerman Prague the opportunity to work much more efficient and almost paperless which eventually saved time in the audit.

Finally 3 people from the office had to do the competence test. The final result will be known in the beginning of November. René Postma from the Voerman HQ says “I am very proud of the staff of Voerman Prague how they dealt with this first audit. I feel confident that in 2011 Voerman Prague will receive the FIDI-FAIM certificate!”