Published on 14 July 2014
In June, 2014, the World Cup Hockey Tournament took place in the Hague. During the two week event, 17 photographers captured images of all the activities including the games and side events.

The result is a beautiful, 104 page World Cup Hockey photo album. A special edition of this wonderful remembrance was presented to Voerman on July 9th by Haagsetopsport.nl, the producers of the album. Ronald Mooiman, the Chief Editor, said, “We are very proud of how this album turned out. It includes nearly 350 photographs showing thousands of hockey players and fans. It is a wonderful keepsake of the greatest sporting event that’s 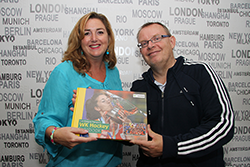 ever been organized in The Hague.”