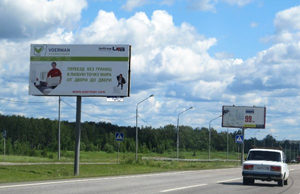 Voerman International in Russia has recently placed 2 billboards on the highways towards 2 major airports in Moscow: Sheremetyevo and Domodedovo.

The billboards were placed on 1 June 2012. our colleagues at the Moscow office have not received any reactions from the public yet, but it’s only been a few weeks since they have been put up. The goal is to attract new customers, to promote the company and the services and reach a wider target audience. It is a new experience, to advertise on billboards, but we hope that it will be successful.