Voerman Russia in preparation for the Winter Olympics - Voerman International

Voerman Russia in preparation for the Winter Olympics 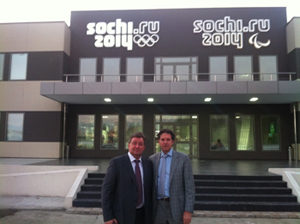 Voerman Russia, based in Moscow and represented by Region Director Dennis van Diemen and Sales Director Dmitry Fomin, gave his presentation in December in preparation to the planning commitee for the Winter Olympics in Russia.

We see the Olympic Games as a wonderful project in which developments in the region are strategic and longer-term, says Dmitry Fomin, Sales Director. Voerman Russia is mainly active in Moscow and St. Petersburg, but that changed quickly.

We see the business activities shift more towards these regions and expect more growth in the coming periods from areas such as Krasnodar. We are seeing the market for domestic removals change rapidly and are trying to meet this growth by opening new offices as we have done in Yekaterinburg “.

Safe transport
Voerman Russia will assist in a variety of projects including hotels, transportation of special goods and temporary import of goods. The great added value lies in the use of the new barcode system that guarantees a safe transport process from origin to destination.

The last evening of the meeting, where Voerman was invited by Sochi’s Deputy Mayor and the Russian Minister of Transportation, was a real highlight. Future cooperation was guaranteed. During this visit, Voerman is in constant preparation with customs to guarantee the best result.

The Olympic Winter Games in Sochi will be held in February 2014 and have a unique character due to its location at the beach but at the same time 20 minutes from the beautiful mountain scenery.