The evolution of our Branch in Prague 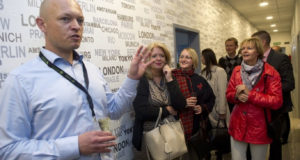 Wiegert Smallegange, Branche Manager tells about the evolution of our Branch in Prague. Wiegert joined Voerman 2,5 years ago, with a background in Operations Management, Finance and HR.

Wiegert: “I was really used to working in Rotterdam – the Port to be precise – where a multicultural environment prevailed. Besides, the Rotterdam locals were really open and critical”, remembers Wiegert.

In the beginning, Voerman Prague started out with Czech and Slovak employees, and one Dutchman. Iva Rendova also has to be mentioned; she joined the branch over 20 years ago – a true ‘Veteran’ of our company.

“The first thing I really had to get used to” – says Wiegert, “was a notion that the Czech are much less ‘open’, compared to the Dutch culture”. Wiegert was hired to support the strategic decision to build the shared services center for the Voerman Group in Prague. There is a lot of talent in the market and management realized that a multi-lingual & culture office was the right solution to support the goals set.

Wiegert launched the “license to serve” program which all new hires follow & must pass before serving our customers ‘Talented people and open communication are the basis of our success, which I am very proud of”. In the last two years, Wiegert managed to add several other nationalities to the staff in Prague. First a Serbian, then a Brit, an American – the list goes on. “Things that matter in the end are a good customer-service attitude, competence in the English language and, of course, the willpower to grow”, shares Wiegert.

“Constructive criticism and hard teamwork – these are the key words to describe our branch in Prague today.”

As of now, our branch in Prague is proud to have a ‘bouquet’ of the following nationalities: Czech, Slovak, US American, British, New Zealander, Ukrainian, Russian, Moldovan, Dutch, Serbian and Lithuanian. All these people are connected through their life in the Czech Republic, the English language and their type of work. The latter, according to Wiegert, ensures that the differences in background and culture become much less important. To put it in his own words: “you must be able to communicate clearly, be self-confident and flexible. All other differences add to the strength of the team”.

“Our office in Prague holds a unique position within the Voerman Group, which for a large part is the merit of our Country Manager, Vadim Hristov. Having strategically chosen our location and having developed a multicultural structure, we are now able to support a large scope of clients – directly or through RMCs. Talented people and open communication are the basis of our success, which is something I am personally very proud of.”