Published on 20 November 2013
In the final calendar leg before the upcoming Winter Olympics that will be held in Sochi, Russia, one question that arises frequently is the ease of traveling to Russia.

Russian authorities envision Sochi as a growing hotspot for winter tourism. And with Russia more and more frequently hosting international events (the 2018 FIFA World Cup will be held in 14 Russian cities), many are questioning just how realistic that is with draconian, bureaucratic, ever-changing and confusing visa requirements.

To date, tourist visas can be confusi 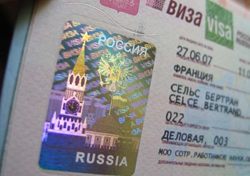 ng. A trip alone to a Russian embassy can be intimidating enough, but one usually has to obtain a ‘voucher’ in order to receive a tourist visa. Vouchers are normally offered by any number of visa agencies and can be presented, along with a filled out visa application, passport, and passport photos to a surly embassy employee in the consular department. Processing times and fees frequently vary from country to country depending on bilateral relations with the host country and Russia.

Good news is on the horizon though. According to a report from earlier this month, citizens of 20 countries or more might be able to visit Russia for up to 72 hours without a visa, provided they fly with a Russian carrier. While the initiative seems highly commercially motivated (the Russian government owns a majority share in Russia’s leading air-carrier, Aeroflot), it would ease restrictions for citizens of the US, Germany, China, UK, Sweden, Italy, France, Spain, South Korea, Japan, Poland, Canada, the Netherlands, Switzerland, Austria, Belgium, Finland, Singapore, Australia, and Greece.

Clearly a step in the right direction in removing the restrictions limiting Russian tourist travel, it’s expected to boost tourism by as much as 60%. We’ll keep our fingers crossed!