Ride for the Roses 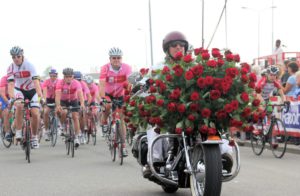 To support the fight against cancer, Voerman will be participating in the 18th edition of the Ride for the Roses on 6th September 2015. Employees will be riding 100 km. in the epic event and receive a rose at the end of the run. The rose is a symbol for a new day for everybody.

To raise awareness Voerman will join the masses of over 11.000 people who will cycle and raise money for KWF Kankerbestrijding (a Dutch foundation that collects money to support research against cancer).