Moving to… the northern tip of Norway

It’s no news that Voerman moves people all around the world. However there are a few places where we do not often come. The northern tip of Norway is one of them. 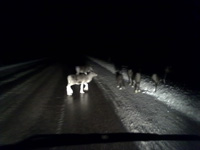 Extreme cold and 24 hours a day darkness are typical for January in Norway.
And what do you do when embassy staff from Prague needs to be moved to Kirkenes in Norway? Just move them!

Between Christmas and New Year the household is packed and

prepared for transport, making it possible for the crew to leave on January 2nd. Since there is no direct route to Kirkenes the crew had to make a five hundred kilometers detour, making the journey just a little longer. With temperatures that make alcohol freeze, the right material is essential. Ordinary diesel then freezes as well and must be switched to “Artic Diesel’. Three days later, the destination was reached without any problems.

After the removal the customer told us that his coffee machine no longer worked. The machine was completely frozen. This was of course covered under the normal insurance policy. “Apart from the exceptional delivery address this is actually a normal move,” said Job van Ede, from Voerman UTS Prague.