Breakfast meeting at the WTC Almere 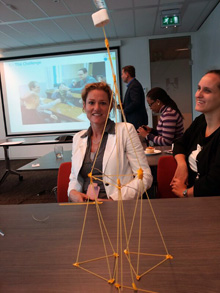 At the 11th of September I visited a breakfast meeting at the WTC tower in Almere. A memorable day as it was exact 10 years ago the WTC twin towers in New York were bombed by a terrorist group.

The event was nice and quiet and again a great opportunity to meet old and new members of the WTC Almere business club.

After the breakfast Laurentiu Neamtu (La Salle university) gave a Marshmellow session in one of the meeting rooms.

All groups of 4 received a marshmallow, some spaghetti sticks and a piece of tape in 20 minutes. We had to make the largest tower and the marshmallow had to be on top.

The idea behind it was to find out how groups are working together. After the session we found out that children were the best tower builders as they are trying different ways.

Our group was the winner of the event, we built the winning tower! Our price? We were allowed to share and eat the Marshmallow.

A great day to start the morning and get to work with a fresh mind.