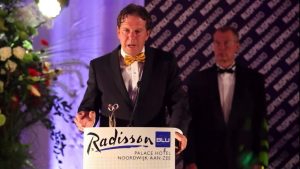 “In the Netherlands, it is common that people with Down syndrome to have a job. In Russia, unfortunately, this is not the case.”

This was part of the heartfelt message expressed by Voerman Russia Country Manager Dennis Van Diemen when received an award at the annual RusPrix Awards held in Noodwijk Aan Zee this past June. Dennis was recognized for his personal contribution to the development of Dutch-Russian economic and cultural cooperation, but beyond his notable role in advancing business relations between the two countries, Dennis has personally focused on trying to make a positive difference for people with Down syndrome in Russia.

“People with Down syndrome are not entirely accepted in Russia. Voerman International in Russia was one of the first companies having employees with Down syndrome when we hired Grisha in 2016. Grisha is doing an excellent job and we are in the process of hiring a second employee like him. Furthermore, we are working on a manual to share with other companies to also start hiring these special and talented people.”

After his speech at the RusPrix event, several people in attendance came to Dennis to express interest in supporting the DownSideUp project, including Marcel Verhoeff, Conductor of the Kozakken Choir, who proposed the idea of organizing a fundraising concert in Moscow to raise money for the charity.

With many more people now more aware of this important cause, Dennis has definitely created enthusiasm and support for helping people with Down syndrome, and is hopeful for the future.

“It looks like a revolution in fighting for equal rights for everyone in Russia, and it maybe is. At least we are making the first steps.”

To learn more information about the DownSideUp project and about the charitable causes The Voerman Foundation supports, please follow the links below.