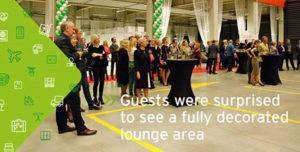 Prominent guests, flutes of champagne, an exquisite feast, all topped off by spectacular decorations and astonishing surprises – Voerman International celebrated the advent of its 25th Anniversary on the Russian market.

Another surprising addition to the evening was the cultural program, which was held secret until the very last moment – The grand performance of the Don Cossack Choir, led by conductor Marcel Verhoeff. The acoustics of the warehouse added something truly magical to the already deep voices of the singers.

The unusual choice of location was not accidental, explains Alexandra Golovina, Head of Marketing & PR: “We really wanted this evening to be unforgettable, so giving our guests the opportunity to dive into the world of transportation was a key element of this jubilee”. It should be noted that Voerman International has already moved 6 times since its foundation in 1991, increasing the quality of its office and warehouse each time again. Voerman International originated in 1986, Headquartered in The Hague.

Part of the Voerman Group, the organization has offices in Russia, Poland and the Czech Republic. The company holds the position of market leader in international relocations and mobility and employs approximately 240 people worldwide.